It’s All There: Filmmaker Carol Bash Premieres The Lady Who Swings the Band

On September 22, 2015, after twelve years in production and planning, the New York City premiere of Carol Bash’s documentary, Mary Lou Williams: The Lady Who Swings the Band was met with great anticipation at a sold-out Harlem Stage Gatehouse.  The film, which was first premiered in February 2014 at the Los Angeles Pan-African Film Festival, was presented by Bash’s company, Paradox Films, and Firelight Media, with support from the Black Documentary Collective and the Documentary Forum at the City College of New York. Many who worked on the film, including drummer Teri Lyne Carrington, vocalist Carmen Lundy, and trombonist and bandleader Wycliffe Gordon, were in attendance for this superb evening of programming, which featured a concert and panel discussion along with the main event, a screening of Bash’s 70-minute film, funded in part by individual contributions collected through the website indiegogo (as well as a host of corporate and non-profit sponsors listed on the film’s website).

To begin pianist Geri Allen took the stage, performing solo renditions of two compositions by Williams, “Blues for Peter” and “What’s Your Story, Morning Glory?”. For many years Allen has been a champion of Williams’s music and legacy, serving as director of the Mary Lou Williams Collective, which has produced several theater projects and recordings (one with the Collective

and another in collaboration with Trio 3

). As Director of Jazz Studies at the University of Pittsburgh, she also recently hosted a cyber symposium on Williams. Film director Robert Altman even cast Allen to portray Mary Lou Williams in his 1996 film, Kansas City. In the following clip recorded for Bash’s documentary, Allen performs “Pisces” from The Zodiac Suite:

At this event, Allen’s performance of “Blues for Peter,” written for Father Peter O’Brien—Williams’s friend, long time advocate, and executor of her estate—featured a rhapsodic introduction covering the entire range of the piano. Allen performed this dissonant and insistent blues with improvised counterpoint and an unwavering swing that phased in and out, the grooves oscillating among walking bass, stride, intricate counterpoint, and torrid flurries of runs. The melodic content suggested many past eras of jazz vocabulary as well, on top of harmonies and chord progressions that spanned historical styles but never lost their connection to the composed melody or its basis in the blues. Given Allen’s intimate knowledge of Williams’s composition and performance practice, it might be tempting to hear Allen’s music as a representation of Mary Lou; more accurately, Allen’s performance could be described as deeply inspired by her knowledge of the woman she refers to as “the Godmother.” “What’s Your Story, Morning Glory?” continued a virtuosic display of historically informed jazz piano techniques. Allen cycled through chorus after chorus of blues with an adventurous spirit, constantly extending the harmonies with left-hand countermelodies, implied double-time, tightly woven inner voices, locked hands style, and two-fisted, thickly voiced rhythmic punctuations. When she finished, she bowed graciously and then quickly took her seat in the audience, as if to make way for Mary Lou.

Carol Bash then took the stage and with a litany of acknowledgements and gratitude, she outlined briefly the challenges of the 12-year period during which she persevered to make this documentary a reality. Bash made special mention of the donors, her family, production staff, contributors to the indiegogo campaign, and some illustrious artist collaborators present at Harlem Stage, many of whom were able to attend this premiere. She closed her opening remarks with a dedication to the aforementioned Father Peter O’Brien who passed away this past May.

Thanks in part to the indiegogo campaign, several clips from the film, such as the one of Allen above, are available on the project’s Vimeo page. Among these are the documentary’s opening:

What followed this excerpt was an expertly crafted tapestry of voices, still images, interviews, musical recordings, animations, and archival footage through which the story of Williams’s life and career unfolds. Any attempt at conveying the totality of the film or the evening would fall well short of the care and artistry that Bash exhibits in The Lady Who Swings the Band. The film includes a long list of interlocutors, each who shed new and different light on Williams; among them are: musicians (Hank Jones, Dr. Billy Taylor, Wycliffe Gordon), writers (Tammy Kernodle and Gary Giddins), scholars (Gayle Murchison, Robert O’Meally, Farah Jasmine Griffin) and Williams’s friends and former associates. In addition to Williams’s own voice, the actress Alfre Woodard serves as the main narrator.

One key theme to emerge from the documentary is that, amid every challenge, trauma, and crisis in Williams’s life, her music prevailed. It served as refuge and reward. Bash’s documentary delves into the vexed relationship Williams had with Andy Kirk and the pressures, stigmas, and violence against which she constantly fought as an African American woman in jazz. In one of the film’s most powerful moments, Bash deftly navigates the horror of Williams’s rape on a train to Chicago for the recording session to which the session’s producers had summoned her after Kirk had left her behind. Reflecting one of many instances in which the pain and joy of Williams’s life were related, Bash lets “Nightlife,” the improvised track Williams cut when first arriving at that session to play at length: ensuring that Williams emerges from this episode in the film in her own resilient and confident voice. Highly scrutinized and multiply marginalized later in her career for her gender, race, dark skin, and disavowal of the hypersexualized feminine image so popular in Hollywood, Williams struggled to find an audience and interested business partners, uprooting to Europe and undergoing cosmetic surgery, all in the hopes of having her music heard.

Bash makes sure we hear Williams’s music, but also that we understand the musician and her impact. Echoing the innovative thinking  her music so clearly shows, pianist Hank Jones and Robin D.G. Kelley remind us that when the progenitors of bebop met to hash out new ideas, they did so at Williams’s apartment. And when they were unsure and had questions, they asked her. The documentary also pays special attention to the importance of Williams’s music to black Catholics in the United States. Her emergence after a self-imposed exile from music, strengthened by new-found faith, provides what Bash describes as “the musical voice for Black Catholic identity.” Williams’s conviction to make positive change and lift up herself and others through her music-reconceived-as-prayer provided watershed compositions for African American sacred music and jazz, elevating her performances to soulful missions of social justice. It is this music that draws the film toward its close: in a moment of acute awareness to sound editing, the filmmaker places Williams’s “Our Father,” sung by Carmen Lundy, in the foreground through the film’s last minutes of narration; and then, as we listen to Williams perform, Bash uses simple, unobtrusive text to recount the details of Williams’s passing, bringing us to the film’s credit on yet another wave of masterful musical and cinematic artistry. As the film draws to a close, Williams’s music prevails yet again. 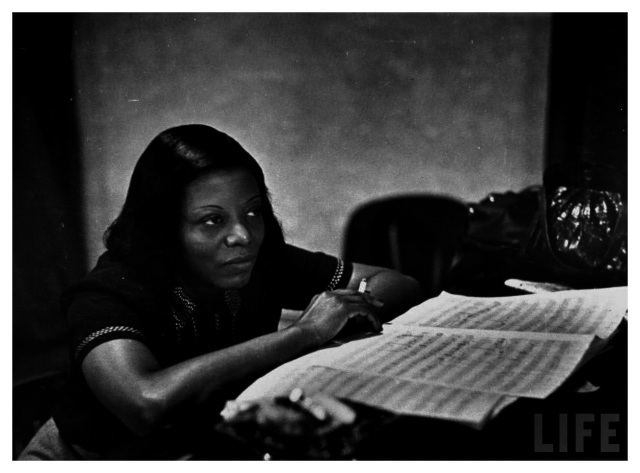 After the film’s conclusion, writer and arts promoter Greg Thomas convened a panel discussion during which Bash, Allen, and Griffin took the stage to answer his and the audience’s questions. All three women discussed coming to know Williams’s music with a combination of wonder, admiration, and a keen, impassioned interest tinged with pensive sadness for not having discovered the pianist sooner. Allen spoke eloquently about Williams’s impact among her contemporaries and the legacy she has left on the community: “Her story was empowering. She understood her worth and the musicians respected her for it. [What I take away most from her legacy is] her focus, intention, and the power of her music for the common good.”

When asked about her process, Bash stated that she sought “to present [Williams] as she was; and she was a very complicated woman.” Griffin echoed this sentiment in praise of Bash by commenting that “the film allows Mary Lou Williams to be all the things she is; we [African American women] are always all those things but we don’t get to be represented as such.” This complexity comes across via the multiple storylines and vantage points through which Bash explored Williams and her music but also in the filmmaker’s creative manipulation of all these layers, wherein the constant interaction and overlapping of multiple media forms in the film highlighted the complex interactions among all the roles Williams played throughout her life. The medium amplified the message.

During this question about artistic process, Bash tried to distance herself from Williams’s artistic achievements and individualistic talents because of her film crew and editing team from whose opinions and input she benefited. In this regard, I would have to disagree respectfully. For her ability not just to arrange all of the film’s voices, perspectives, and media forms into a coherent and harmonious polyphony but also to evince such powerful resonances among them, the filmmaker deserves all the credit for masterful orchestration she so eagerly bestows on Williams: in the film Bash achieves a singular, artistic statement whose form allows space for the emergence of individual perspectives and augments them through superb craftsmanship and thoughtful arrangement. Chief among these, of course, is Mary Lou Williams, who through Bash’s work has finally earned the unqualified praise and thoughtful analysis that she and her music have always warranted. The Lady Who Swings the Band offers a definitive corrective to decades of willful shortsightedness by those who have overlooked—or looked down upon—Williams, her career, and the importance of her contributions to the jazz world. Bash’s work draws out and redresses the contradictions, dichotomies, and double standards of the misogynist, phallocentric jazz community that have relegated Williams to the footnotes and marginalia of U.S. jazz history and rightly re-places her squarely within its main body, all while celebrating Williams’s ability to transcend the stereotypes, biases, and violence from within while playing at least “as well or better than all the men.” Even without such critical power and filmic artistry, The Lady Who Swings the Band deserves a place among the great jazz documentaries for its exhaustive research on and comprehensive treatment of its subject. The film is a triumph in all regards and should earn due praise as an invaluable resource and captivating work of visual art.

Harlem Stage is to be commended for hosting an evening worthy of Mary Lou Williams and the New York City premiere of Bash’s work. Adding the musical performance and panel discussion to the screening provided engaging contexts that rounded out the film’s presentation. Through these, the audience came to deeper understanding and appreciation of Williams’s life and music, as well as the research and artistic processes that Bash undertook. A celebratory tone resounded throughout the entire event—capped off with a reception that allowed the audience to converse with all the artists and scholars—as did an insistence on the importance of staging works by African American female artists. During the panel discussion, when asked about the lessons she took from Williams’s career, Farah Jasmine Griffin succinctly summarized this call-to-action: “The lesson is constant growth and creativity from which we should take a charge for creating spaces that will nurture a future Mary Lou Williams.” Confronted with all the complexities and inequalities through which Williams persevered, in The Lady Who Swings the Band Carol Bash has bestowed on us a wonderful gift that leads this charge, amplifies the majesty of Williams’s music, and provides a stunning example of passionate, incisive, and highly creative work.

[For more on Carol Bash and this film, see the film’s website, Vimeo channel (which includes several behind-the-scenes clips from the documentary) and this 2013 interview with Jewel Kinch-Thomas. For more on Mary Lou Williams, visit this digital archive hosted by the Institute of Jazz Studies at Rutgers University Newark.]