A polymath whose career has spanned the sciences, the humanities and the arts, Iyer received an interdisciplinary Ph.D. in the cognitive science of music from the University of California, Berkeley. He has published in Journal of Consciousness Studies, Wire, Music Perception, JazzTimes, Journal of the Society for American Music, Critical Studies in Improvisation, in the anthologies Arcana IV, Sound Unbound, Uptown Conversation, The Best Writing on Mathematics: 2010, and in the forthcoming Oxford Handbook of Critical Improvisation Studies. Iyer has taught at Manhattan School of Music, New York University, and the New School, and he is the Director of The Banff Centre’s International Workshop in Jazz and Creative Music, an annual 3-week program in Alberta, Canada founded by Oscar Peterson. Iyer recently finished a multi-year residency with San Francisco Performances, performing and working with schools and community organizations.

The Sound Breaks concert will be the first time ever that Iyer’s trio and Tirtha perform on the same bill. In addition, the concert will serve as the Philadelphia-area premiere of the Trio’s new recording Break Stuff. For more information, watch the video below:

Meta DuEwa Jones is an Associate Professor of African American literature at Howard University. She earned her BA with honors in English with a certificate in Afro-American Studies from Princeton University in 1995, an MA in English from Stanford in 1996, and Ph.D. from Stanford University in English and American Literature in 2001. Her research interests include 20th- and 21st-century American poetry and poetics, especially in relationship to gender, sexuality and performance studies; African-American literature, criticism and theory; textual studies; jazz; gender and sexuality studies; and visual culture studies. Her recently published book, The Muse is Music: Jazz Poetry from the Harlem Renaissance to the Spoken Word (2011), highlights the intersections of race, gender, and sexuality within the jazz tradition and its legacy in hip hop. The book focuses on musical, visual, oral and technological performance with a special focus on poets involved in contemporary venues for black writing such as the Dark Room Collective and the Cave Canem Foundation. It recently received honorable mention for the William Sanders Scarborough Prize from the Modern Language Association.

Click here to hear Professor Jones reading some of her own work. 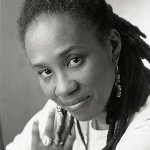 Omi Osun Joni L. Jones (Ph.D., New York University) is an artist/scholar and an Associate Professor in the African and African Diaspora Studies Department at the University of Texas at Austin. Jones’s scholarship focuses on theatrical jazz, Yoruba-based aesthetics, Black feminisms, performance ethnography, and activist theatre. Her recent performances include “sista docta,” “Falling (in Love and War),” and “Gathering Honey,” and her keynote address “Six Rules for Allies” has become a popular text among activist communities. She is a member of the Urban Future Network and Body Politic Think Tanks at the Yerba Buena Center for the Arts in San Francisco, and is co-editor with Lisa Moore and Sharon Bridgforth of Experiments in a Jazz Aesthetic: Art, Activism, Academia, and the Austin Project (University of Texas Press, 2010). She has recently begun a series of improvised explorations with 3 Jazz Collective in Austin, Texas, and serves as the Community Organizer for Bridgforth’s Dat Black Mermaid Man Lady as it visits cities around the U.S. Jones’s forthcoming collaborative ethnography, Theatrical Jazz: Performance, Ase, and the Power of the Present Moment (Ohio State University Press), will be available in the spring of 2015.

Garry L. Hagberg is the James H. Ottaway Professor of Philosophy and Aesthetics at Bard College. Author of Art as Language: Wittgenstein, Meaning, and Aesthetic Theory, and Meaning and Interpretation: Wittgenstein, Henry James, and Literary Knowledge, his most recent book is Describing Ourselves: Wittgenstein and Autobiographical Consciousness. He is presently completing a new book, Living in Words: Literature, Autobiographical Language, and the Composition of Selfhood, and editing the volume Fictional Characters, Real Problems: The Search for Ethical Content in Literature. Editor of the journal Philosophy and Literature, he is also a jazz and classical guitarist, and is co-author with Howard Roberts of the three-volume Guitar Compendium: Technique, Improvisation, Musicianship, Theory. As a guitarist Hagberg has appeared on three albums with Dan Siegel (one, on which he was featured soloist, spent twelve weeks in Billboard’s top ten), three with The Atlantic Jazz Trio, and three with his musical colleague Tom Bergeron; his most recent CD, Garry Hagberg: Quartets was released in Europe in 2014. In 2000 he guest-edited a Special Issue on Improvisation in the Arts of The Journal of Aesthetics and Art Criticism, and in 2011 received an award in jazz instrumental composition for a piece recorded with, among others, bassist Glen Moore and drummer Graham Lear. In addition to the above projects, he is also presently writing a book on aesthetic issues in jazz improvisation.

Stephon H. Alexander, the E. E. Just Professor of Natural Sciences at Dartmouth is the Director of the E. E. Just Program. He received his Ph.D. in physics from Brown University in 2000, with a dissertation titled “Topics at the Interface between String Theory and Cosmology.” From 2000 to 2002, he held a postdoctoral fellowship from PPARC (the Particle Physics and Astronomy Research Council of the United Kingdom). He recently won the National Science Foundation CAREER award and was elected a National Geographic Emerging Explorer. His research focuses on unresolved problems— such as the cosmological- constant or dark- energy problem— that connect cosmology to quantum gravity and the standard model of elementary particles. In particular, he uses observations in cosmology to both construct and test fundamental theories.  He is passionate about teaching and researching with students and finding connections between music and science.

Click here to listen to an extended interview on science and creativity with Professor Alexander.

Rachel Carrico is a Ph.D. Candidate in Critical Dance Studies at the University of California, Riverside. Her dissertation explores “second lining” in New Orleans – an improvised, collective, vernacular dance form rooted in the city’s African diaspora parading traditions. Rachel’s writing on performance in post-Katrina New Orleans has appeared in two issues of TDR: The Drama Review, and an essay on the connections between improvised dance and the “choreographed” disaster of Hurricane Katrina is forthcoming in TBS: The Black Scholar. As a founding ensemble member of Goat in the Road Productions in New Orleans, Rachel has directed, choreographed, and performed in many original dance/theatre/performance pieces; founded a young playwrights’ festival; and conducted three artistic residencies with the Guatemalan ensemble, Grupo de Teatro Artzénico (in Guatemala, New Orleans, and Riverside). In creating scholarship, Rachel thinks about improvised dance and its connections to race, gender, and capitalism. In creating performance, she lives on the border between theatre and dance, blending text and original music with release-based, gestural, and social dance vocabularies to explore stories of loss, memory, and human relationships. Rachel holds a B.A. in English and an M.A. in Education from Truman State University (Kirksville, MO), and an M.A. in Performance Studies from New York University’s Tisch School of the Arts.

Kelly Powers is a pianist, composer and improviser based in New York City. She graduated magna cum laude from Jackie McLean’s Institute for Jazz Studies at the Hartt School of Music, University of Hartford. She also received her Master’s degree in Jazz Performance from Manhattan School of Music. She has released two original albums including The Kelly Powers Trio (feat. Grammy-nominated drummer Kendrick Scott) and The Kelly Powers Project (co-produced by Harold Mabern, with all tracks composed and/or arranged by Kelly). She has many years experience playing with big bands and small jazz groups. Highlighted performances include: tours with the Artie Shaw Orchestra and Cab Calloway Orchestra, Bjorkestra at the Regattabar and Kelly Powers Quartet featuring trumpeter Jeremy Pelt at Smoke Jazz Club (NYC). She has also performed with all-female bands (featuring Sharel Cassity and Linda Oh) at the annual Women in Jazz Festivals at the Zinc Bar. Kelly has maintained a private piano studio for thirteen years: most recently as jazz piano instructor at Swarthmore College and as Head of Keyboard Department at the True School of Music in Mumbai, working with students on improvisation and founding the school’s first ever jam session. Also, while abroad, she performed at the Mahindra Blues Festival for audiences of 3000 people, opening for the Grammy Award winner Derek Trucks. She is currently performing and has a private teaching studio in Philadelphia and New York City.

These guests will be joined by the following Swarthmore College faculty at various symposium events: